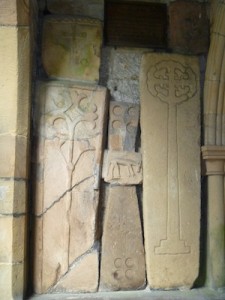 These stone coffin lids can be seen in the south entrance porch. Some appear to be of Saxon origin, some rather later. Such stones show that there must have been a church on this site during Saxon times. 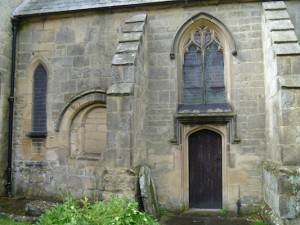 This picture shows four periods of architecture close together on the south wall of the chancel. The blocked up doorway is from Norman times. On it’s west side is an Early English lancet window and to the east side is a buttress of the Decorated period. Further to the right over the chancel door is a window in the Perpendicular style. 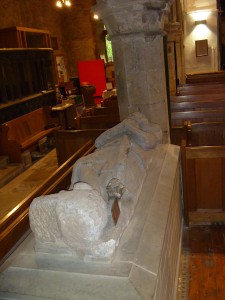 Between the nave and the south transept, formerly known as the Collumbell Quire and now called St. Chad’s Chapel, is the oldest monument in the church. It is a recumbent stone figure of a knight, believed to be Sir John de Darley. His hands which hold a heart are folded in prayer, his legs are crossed at the knee and he is dressed in a surcoat over a suit of mail. His features are well preserved for its age. During the 13th century the Manor of Darley was divided into two parts, the Old Hall Manor and the Nether Hall Manor. In 1302 it appears that the latter passed into the ownership of John de Darley who was also Governor of Peak Castle.

The south window in St. Chad’s chapel is by Burne- Jones and depicts scenes from the Song of Songs. 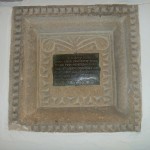 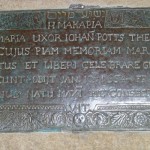 In the south wall of the chancel is a small brass plate which is a rare example of a polyglot brass, meaning that the inscription is in different languages, in this case Hebrew, Greek and Latin. It is dedicated to ‘Mary, wife of Dr. John Potts’ who died in 1654. Dr. Potts was Rector of Darley Dale during the reign of Charles I, the Commonwealth and into the reign of  Charles II. 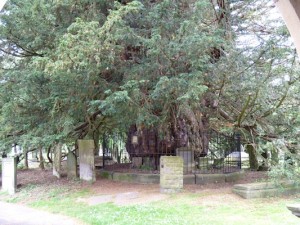 The Yew Tree, which is situated just outside the south porch, is claimed to be 2000 years old and is one of the thickest in England with a girth of around 33 feet, 4 feet from the ground. Around the base of the tree are stone tablets commemorating some outstanding actions during the Second World War. 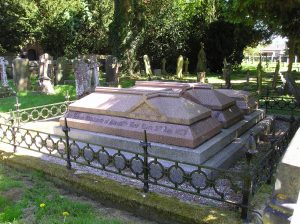 Sir Joseph Whitworth and his second wife, Lady Louisa Whitworth, are buried in the churchyard. Sir Joseph is best known for the development of the Whitworth Screw and the Whitworth Rifle. He introduced larger and more economical units of mass production in his machine tool and armaments factories and persuaded the Board of Trade to adopt standard measures. He lived the last 13 years of his life at Stancliffe Hall, Darley Dale (a private residence today). The Whitworth Institute on the main A6 road was gifted to the people of Darley Dale and was intended to be a place where people could meet for leisure, recreational and educational purposes. It is well used for these purposes today. 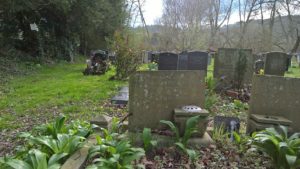 The one war grave we have at St. Helen’s is that of Donald Standish Soppitt, a Telegraphist in the Royal Navy during World War 2. He died on 23rd November 1944 aged 19. The family obviously chose to provide their own headstone and he is buried next to a family member.

To find the grave, go through the main gate to the church, turn left and follow the path down to a bin and bench on the right, turn left opposite down a wide grassy path. The grave is at the end of the path on the right.

Other graves give the impression that they may be a war grave but are in fact memorials for those buried abroad.

Powered by WordPress  |  BlackWell by InkThemes.